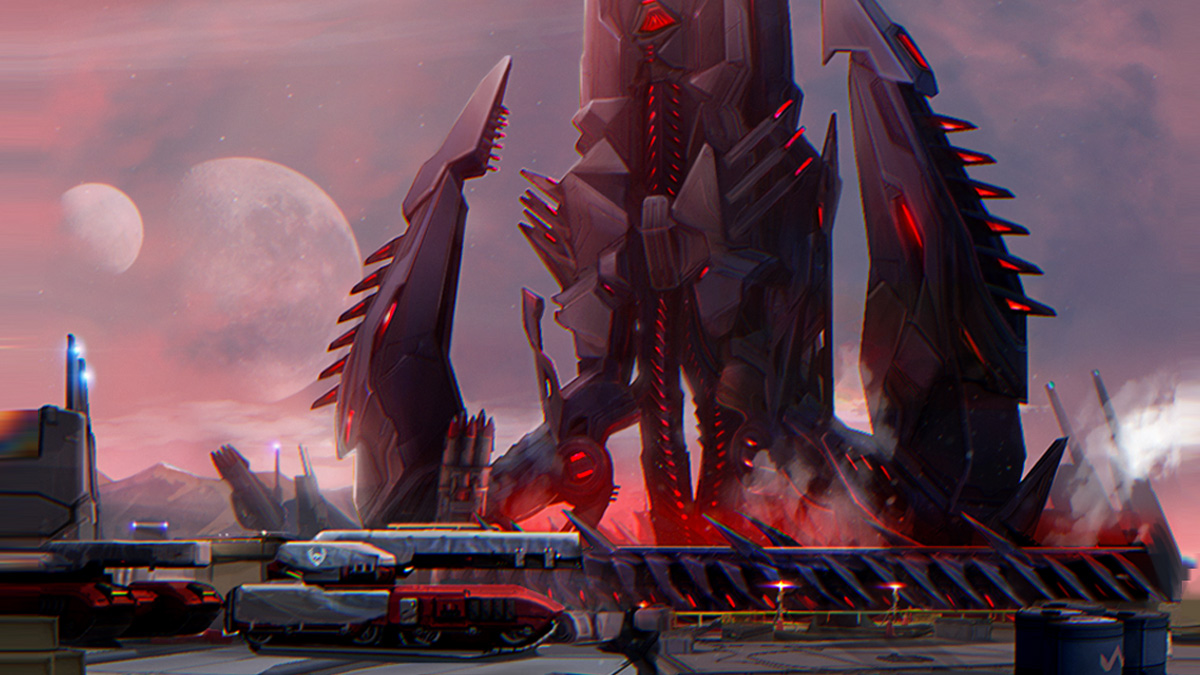 We are happy to present you with the Wormhole Update! In this update: the story continues, updates to base defense mode and Tournaments are introduced, weapons evolution is redesigned, and much more!

Captain Blake is ready to plunge into any hell and even head over to the depths of Utopia for the sake of victory! His next target is the Wormhole Mine, which the Dominion drilled to explore the nature of the Xi. Now this object is under control of the Black Legion Renegades, but the Dominion left its representative there - the super-heavy Tyrant Dominator. This is the commander of military robots, and therefore it is protected, armed and equipped according to the highest standard in existence. To complete the Futuris project, Blake needs one of its most important elements - the Matrix. And, of course, Tyrant won't part with it willingly... Increasing Blake's maximum levels (up to 55) and scientific progress (up to 104) will give you access to new technologies and help you complete this difficult mission.

The changes affected Blake's base as well. It has become more compact and more convenient to use. All upgrades of weapons, armor and partners are available in Blake's profile, the Hangar became part of the Workshop, and the Co-op store moved to the Office.
The general level of base protection is now assessed using a new parameter - Defense Power. It consists of the values of all positioned units’ Power. You can see your Defense Power on the Base Defense screen, and the Power of enemy bases - in player profiles.

Maximum unit level was increased to 59. Owners of skins will receive gems for successful defense of the base. The rewards in the Terror and Base Defense modes were increased, and they grow with every 1,000 rating points. Exploration is now available from the raid window.
Co-op mode for attacking enemy bases has been added. In case of victory, the player who responds to your call receives Medals, the remaining rewards are divided proportionally according to the damage dealt by each of you. Co-op mode is available only for normal attacks, but not for Revenge or Tournament. Team win will not give you rating points, although they will be removed for defeat.  The Power parameter also replaced the remaining indicators of weapons, armor and partners. It grows with an increase in the level and rank of the item. The Power of all your current equipment and that of your partner makes up the Power of the unit. It determines access to missions, and the Power of partners determines how fast the caches are discovered by them.

Redesigned evolution system of basic weapons and armor (of those that you have had from the very beginning of the game). After evolution, you only have the top rank left, irrelevant items no longer clog up the inventory. Production technologies of this equipment have been removed. This will be compensated by giving you a level of the new Modernization technology line, which will provide you with a bonus towards damage from grenades and healing with medkits.

A lot of work has been done to correct the errors that occurred in the Tournaments. When finding the enemy, not only their rating, but also the Power indicators are now taken into account. The number of rating points for winning Tournaments was reduced, and victories in Tournament battles are counted in daily quests for attacking enemy bases. You can now conduct regular Exploration in Tournaments, and it has become more convenient to use Espionage. Rewards were revised to accommodate changes in item evolution. For those who placed 7 to 10 in the regular and large Tournaments, parts of acid weapons were added as prizes.

The Xi creatures now have new abilities! Spiders' spit leaves small puddles of acid for a short time. A puddle that is even bigger and more dangerous will appear in the place where Berserker Spider or Soldier Spider died, and the Cultist of Xi and the Priestess will shoot several energy charges after their deaths.
New weekly quests will reward gems to players with active Premium mode. A special kind of opponents appeared - if you defeat them, you will get Magmatite. In Co-op mode, the player who delivers the finishing blow will get this reward.

Psi damage dealt to enemies with Psi potential was significantly increased.
Psi charges are no longer given out after killing such opponents with Psi force. The Chosen One Set now increases the Psi Power by 10% instead of the fixed number of points. Medkits now restore a little bit of endurance, and Resurrection will raise it to the maximum.
For successfully helping other players in 4th level Terrors, various boxes are now given in addition to Medals. There is now a chance to find the Executioner blueprints in the caches of the Elisium sector.

We wish you new victories, captains!