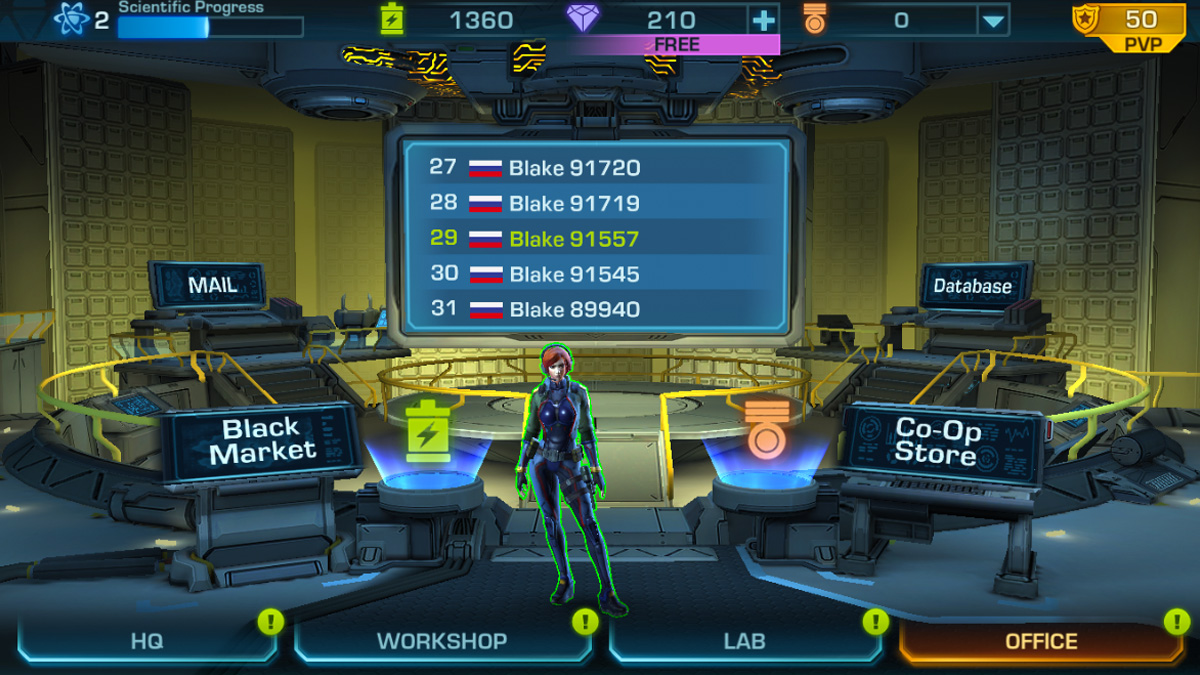 Tireless Blake, smuggler market, cooperative raids, changes in production, a new face at the base and much more - meet our most recent update!

Blake discovered that he has another superpower - running no longer makes him tired! During combat, the Captain can move around in one of three ways. He can either walk and shoot, run to dodge enemy bullets, and roll to quickly get away from an attack. That is why we also changed the bonuses for certain types of equipment. In addition, Blake’s shotgun now needs to be reloaded after every shot, but its range of fire and damage area have been increased. Enemies have also changed. Supersoldier and Suppressor mastered new powerful attacks, but now have less health. After the timer countdown, the Chosen One unleashes a wave of deadly energy on the enemy, and after the death - a hail of energy orbs. And these attacks can’t be dodged! The game now features cooperative raids, and it's the only type of attack on enemy base which can be carried out together with another player. In standard assaults, only partners or summoned mercenaries can accompany you. As the reward for Co-op raids, you will receive blueprints of squads and bosses for base defense. When successfully helping other players, you will get medals, and wins are counted for completing daily Co-op battle tasks and victories over enemy bases.

The lab reactor now produces a new resource - Energy. It is used instead of Biofuel to manufacture grenades and medkits. The manufacturing process is now more time-consuming, but you can queue up to five items in a line so that their manufacture is started automatically. All this concerns only individual medkits and grenades, you can still instantly create packs in exchange for gems.

The Black Market is now open! There you will find rocket launchers, blueprints of bosses for base defense and parts for Chosen One, Dragon and Special Ops set items production. Gems and Biofuel are accepted as payment. Access to the market can be obtained via the Office, where you should first earn enough Smuggler reputation. To this end, you first need to win over Rebecca by buying smuggler goods during the Citadel Defense event, making purchases in the Battle Tricks Store and using espionage.

Meet the reinforcements: the Lab has a new character - Professor Rose. She will help you get hold of useful lasting bonuses.

We wish you good luck and lots of new victories, Captains!